Friendship Firehouse – Then and Now

In 1774, Friendship Fire Company formed the first volunteer firefighting company in Alexandria. Located in Market Alley at the corner of King and Royal Streets, the first location was an engine shed that housed a small hand pumper. Volunteers would have brought buckets and axes, along with other tools to the fire. Until 1840, Alexandria citizens had to keep and maintain a bucket per floor of each home or commercial building, and these were for communal use at the scene of any fire. Early hand pumpers were supplied with water from a pump using the bucket brigade and water passed down by citizens and firemen alike.

In 1838, Friendship merged with the Crescent Fire Company, keeping their name but gaining more members and their first engine house, a two storied wooden structure on King and Columbus. The fire company soon petitioned City Council for their own lot and in 1851 moved this structure to their present site on St. Alfred Street. The building there today was built in 1855. Originally, there would have been two bays or doors, a balcony and steeple above the cupola, which still houses the original 1857 bell. Packed dirt would have been seen on the floor, though bricks were added in the 1920s. In 1871, the façade was replaced and two doors went to one, the balcony removed and the steeple taken off at cupola height.

Until the 1860s, all fire engines were hand-powered and pulled by the firefighters themselves. No horses were kept here. You will find no stables in the back or alley and as no men were needed to care for the horses, no one stayed here. You will also find no pole for which the firefighters slid down. Again, the volunteers would have supplied their own buckets and uniforms, but they now had a house to store ladders, hooks, torches, lanterns, and at least two to three fire apparatus, among other supplies.

As no one slept here (not even George Washington, but we’ll get to that), there is a meeting room upstairs.  Volunteers were nominated and voted in by members of the company and once in, you had to sign an oath of allegiance that you would be faithful to only this company (by 1827 the city had four more fire companies, so there was some competition). Volunteers paid a one dollar application fee and dues of twenty five cents every three months. These fees were applied to repairs to the engine house and equipment, and well as saving to purchase the newest apparatus available. Volunteers had to supply two buckets to each fire and their own uniform, although this differed from company to company.

Alexandria was occupied by Union forces for the duration of the Civil War. Soldiers took over all five Alexandria firehouses and three of the fire companies disbanded. While Friendship survived, the company struggled after the war. In 1866 a paid fire department was formed by the city, but as Friendship wanted to keep their name, they chose to stay a private entity. This would lead to awkward moments at fires (not following City Fire Warden as Friendship was a private company), debates as to who should pay for equipment (city vs. private), and returning a steam engine within a year as they could not pay for it. Ultimately Friendship lost out on being Company 1, a distinction they held for over a hundred years.

From the 1880s until the 1920s, the Friendship Fire Company participated in parades. They made an appearance in the George Washington Birthday Parade annually and traveled to New York in 1889 for the Presidential Centennial Parade. By the turn of the 20th century, the Company reorganized into a philanthropic association that still meets today. It raises awareness for the City Fire Department, funds for Fire Science Scholarships and supports the museum’s mission. 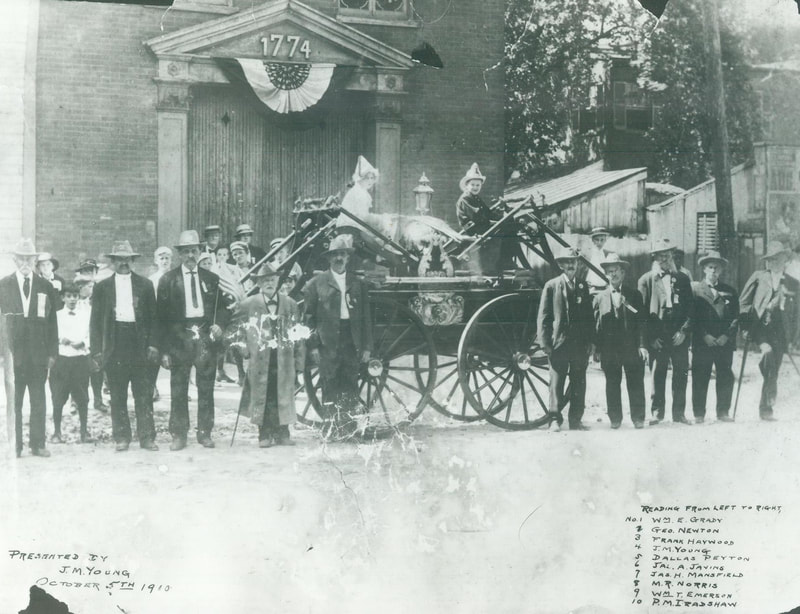 Formed in 1774, Friendship Fire Company was the first volunteer Fire Company in Alexandria. During this time, equipment was pulled and pumped by hand, and companies needed large rosters of men to haul and operate the apparatus.  Fire companies like Friendship purchased their own engines, and members supplied their own uniforms and buckets, as well.

After the Civil War, Friendship and the other fire companies of Alexandria struggled with returning to normal operation. Numbers were down and equipment needed repair and replacement. With the creation of the City Department in 1866, some struggled more than others. Friendship chose not to join in the city plan to combine fire companies into one corporation, and ceased to firefighting operations.

In the late 19th century, Friendship Fire Company, now a firefighting veterans society, focused on parading. During this time the suction fire pumper (on display at the museum) became the official parade piece and was painted several times over.

However, by the early 1900s, Friendship was looking to change its scope. Members began to preserve its archives and memories of Friendship Fire Company and in 1903, the group decided to repair the engine house (now the site of the museum). By 1904, the organization became the Friendship Veterans Fire Engine Association and adopted a new constitution and by-laws.

In 1905, the Association attempted to open the Engine House as a museum. While it was not successful, it led the way to the preservation of the building for the future. From the 1950s through the 1980s, the Association extended honorary membership to presidents, athletes, entertainers, and astronauts. The Association retained the building until 1989, when the City of Alexandria acquired the property and developed the museum we know today.
​
The Friendship Veterans Fire Engine Association continues its mission today, working with Historic Alexandria to support the preservation and presentation of fire history in the city.
​
LOOK SHARP: UNIFORMS OF THE FRIENDSHIP FIRE COMPANY 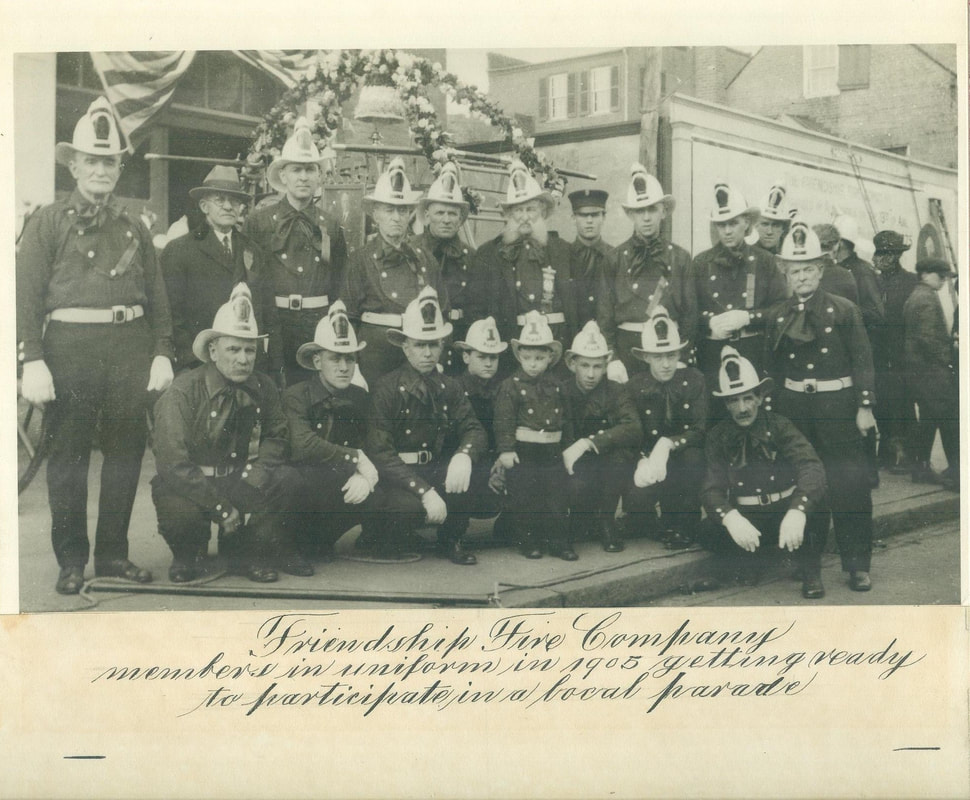 Although Friendship Fire Company dates back to 1774, its first uniform was not until 1796. Imagine being at a fire and not really knowing who’s in charge. The first uniform was a black cap with an upright white front. This did not change until 1839 when they wore fire caps, costing three dollars each and matching hat badges, which was worn for the George Washington Parade.

In 1846, the uniforms changed to a “Green baze [sic] trimmed with Red & Red Belt,” but that did not last long. By November 21, 1851 the Friendship Minute Book notes, “On motion it was ordered that the Co. wear a black cap, belt, pants, & blue frock coat, & afsemble [sic] at next meeting in uniform & that  notice of said meeting be published in Alex. Gaz.”

Jacobus Turck is credited with inventing the first fire hat in the 1730s. Looking like a stovepipe hat, it was leather with a high crown and wide brim. In 1836, Henry T. Gratacap, a New York luggage maker and volunteer firefighter, designed a helmet similar to the one we recognize today. Reinforced dome-shaped leather with a front shield and brim rolling to a long back tail, the firefighter's head awarded some protection from falling materials and water that ran off the back of the helmet.  The brass eagle, which holds the top of the front piece to leather helmets, can be traced to around 1825 when an unknown sculptor created a commemorative figure for the grave of a volunteer firefighter. Firefighters were not wearing eagles prior to this, but it has been part of fire helmets ever since.

Here at Friendship, it appears firefighters used the fire hat for several decades before transitioning to a helmet. Only then did the fire hat become part of their parade uniform. For instance, the Minute Book remarks, on March 21, 1853 that “the committee on hats reported & on motion ordered that Mr. Warring make the hats for company and Mr Enswipel paint them.” On August 16, 1858, a motion was recorded that “it was Resolved that we parade in glazed caps. The Axemen excepted wich [sic] shall wear fire hats.”

In order to keep costs down, the Company bought secondhand when they could. In 1860, they purchased hats from the Patapsco Fire Company of Baltimore. In 1871, it is written, “On motion of S. S. Brown That a committee be allowed to correspond with parties in Philadelphia in regards to cap and belt furnished to the company cheaper than by bying [sic] here in town which was granted.”

In the late 1850s, the firehouse minute book mentions new uniforms but no details of what they looked like is included. It is not until April 17, 1865 that another mention is seen. “On motion it was resolved that we attend the funeral of the president  on motion J Powell was appointed marshal for the occasion on motion was adopted that we wear red Shirts black pants Black Hats.”

The last change of uniforms comes in June of 1871, when the minute book states, “Report on committee on uniform Reported by adopting red flannel shirt and white belt trimmed with blue and raised letters on the back to red [sic] the word friendship The buckle to be in the shape of 2 hands to Represent the motto of the company.”

Although we’re not certain what made them change, if a new style was in vogue, or why a certain color was chosen, it does appear they changed uniforms when an event was upon them -  a parade, a ball, or an excursion with another company. Regardless of what they were wearing, we know that the uniform defined the Company, extinguishing between the Stations, and therefore, defining the men.

About the Friendship Fire Company